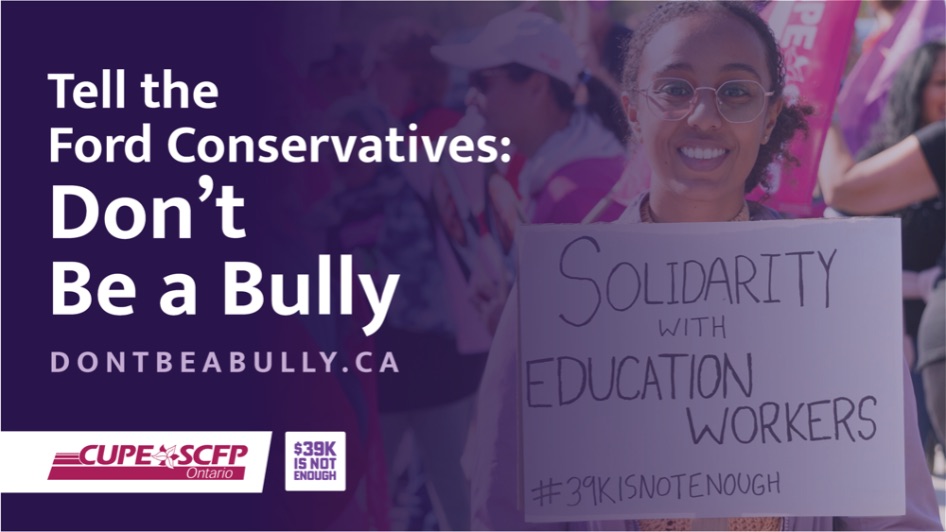 On Sunday, October 30, CUPE education workers served their 5-day strike notice ahead of a final week of mediation with the provincial government. These education workers are some of the first groups to negotiate with the province after facing three years of Bill 124’s 1% wage caps.
In response, Premier Ford’s Education Minister Stephen Lecce invoked the Notwithstanding Clause and introduced back-to-work legislation to prohibit a strike and impose a contract on the 55,000 workers. No government in Canada has ever taken this egregious action before.
In Canada, workers have a Charter-protected right to engage in free and fair collective bargaining, and to withdraw our labour through a strike. The Supreme Court of Canada has repeatedly upheld these collective rights, and here’s why;
The right to strike promotes dignity. Workers must be allowed to have a say in our own working conditions. This includes refusing working conditions that are imposed on us.
The right to strike promotes equality. Deep inequalities exist between workers and employers. The possibility of a strike enables us as workers to negotiate on more equal footing.

What are education workers fighting for?

Education workers need a raise, and are demanding real wage increases after a decade of stagnation and 4 years of Bill 124 caps. OSBCU states that members earn just $39,000 per year on average, with more than half having to work a second job. The lowest paid in the sector, education workers faced a real wage cut of 11% over the last 10 years due to provincial wage restraint legislation.
The CUPE Ontario School Board Council of Unions (OSBCU) unites 55,000 CUPE education workers in the public, Catholic, English, and French school systems across the province.

What other effects could Lecce’s legislation have?

Imposing a contract is an attack on all workers. Many Unifor members in the public sector work in healthcare, where the right to strike is already restricted. Instead of even having access to binding arbitration, this sets the stage for imposed contracts for some of our most underpaid members.
The right to strike must not be eroded. In Canada, workers agree to abide by an already rigid set of laws that govern the right to strike, and how and when it can be used. Invoking the Notwithstanding Clause revokes that right and we must all strongly oppose this attack on worker’s rights.
Other conservative governments are watching. What happens here, in Ontario, can send a message to governments and employers across the country that they don’t need to negotiate with their own employees and can impose working conditions.

Unifor will stand with CUPE education workers as they determine their next steps in this fight. We know that the only place to reach a fair contract is at the bargaining table, but Minister Lecce refuses to meet education workers on equal footing
The next several days and weeks will set the course for public sector bargaining in Ontario for years to come. Workers must remain united and be firm in our demands for fair wages.